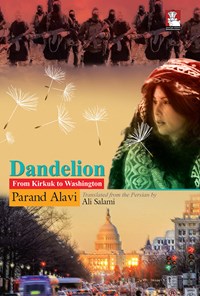 from Kirkuk to Washington

Dandelion from Kirkuk to Washington  is a novel by Parand Alavi about a girl named Rozhan in Iraq that had to immigrate as a dandelion because of ISIS crime and slaughter to save her life.

Parand Alavi is an Iranian physician and novelist. In her novels, she deals with various issues ranging from frustrated love, class differences, displacement, identiy and culture of the Iranian immigrants in the United States. She hails from the Alavi family and is a cousin of Bozorg Alavi, the prominent Iranian novelist. In the manner of the Iranian literary giant, she uses a simple but passionate style in expressing the most fundamental human values. Among her novels are From Kirkuk to Washington, The Mirage of Freedom, Willows in the Wind and The Broken Mask. She is currently practicing medicine in Glenn Dale, Maryland.

a part of book dandelion from Kirkuk to Washington

Fear took hold of Omar’s entire being. He ran into the kitchen

and instantly returned with a glass of water and splashed it

over his mother’s face.

Ameneh opened her eyes and glanced around languidly.

She recalled what Omar had said. Suddenly she rose to her feet

and said, “Where are Rozhan and Usman now?”

“Over the hill, near home.”

Overcome with consternation, she left home with Omar following

If floods and tempests had broken loose and overwhelmed

heaven and earth, if volcanos had erupted out of wrath and scattered

the burning particles of fire, they could not have truly described

the brutality and sorrow of what Ameneh had witnessed.

Over the hill, Rozhan was weeping in her blood-stained

torn clothes and clawing at the earth with her hands. A little

further off, the severed hands and head of Usman were lying on

“Look away,” she bellowed.

Drops of tears erupted from her agonized eyes. She sat

down beside Rozhan, placed her head on her lap and crooned a

lullaby in her ear.

“Get up. We should go back home,” she said to Rozhan as