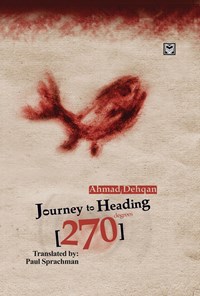 Journey to Heading 270o takes place during the Iran-Iraq War, which began on September 22, 1980 when Iraq invaded Iran. Hostilities ended eight years later, in August 1988; however, the official exchange of prisoners of war did not take place until fifteen years later. The War continues today, as Iran claims tens of billions of dollars in reparations from the Iraqi government.

The Iran-Iraq War is known in Tehran as Jang-e Tahmili, or “The Imposed War.” To Saddam Hussein it was another Qadissiyah, a reference to the decisive battle of 637 AD, in which the forces of Islamic Arabia defeated the armies of the Sassanian Empire of Iran. By the middle of the seventh century, the news of the spectacular victory of a small Muslim army over the mighty Persian Empire had spread to many places, greatly enhancing the stature of the new religion. The two ways of naming the Iran-Iraq War are modern tokens of how history, religion, and race divide the two peoples who fought it. The Iraqi people are primarily Arabic speakers who identify with other Arab nations of the Middle East. Though about sixty percent of the Iraqis are Shi‘a, Shi‘ism is not the state religion in Iraq, which was a secular dictatorship under Saddam Hussein. Iran, on the other hand, is not only a Shi’ite theocracy; Shi‘ism forms the ideological basis of the Islamic Revolution that occurred in 1979-80 under the leadership of Ayatollah Khomeini.

The official Iranian view of the War is that it was a plot hatched in the West (US, Britain, former USSR) and carried out by a proxy, Saddam Hussein, to smother the Islamic Republic in its infancy. To Saddam Hussein it was a war to liberate the Arabs living in southwestern Iran from the yoke of Persian tyranny and to

regain the oil-rich territory lost to the Iranians as a result of previous conflicts and international treaties. Iran calls this region Khuzestan, while the Iraqis term it Arabistan. Saddam mobilized support for his cause with appeals to Sunni (majority Islam) solidarity and to pan-Arabism. The Iranians, who, as Shi‘is, are a minority in the Islamic world, also saw the eight-year conflict in religious terms. They assumed a role that they have played often, that of the injured party armed with facts that the majority refuses to accept. In their view they were innocent victims in the eternal battle between Truth and Falsehood. The hundreds of thousands of Iranians who perished during the War, whether at the front as volunteers and regular troops or in the cities as casualties of Iraqi missile attacks, did not merely die; they were martyred. Virtually every city, town and hamlet in Iran displays large portraits of the dead and boasts of being “martyr-nurturing” (shahid-parvar). Today, in Persian, a wounded soldier is not merely “disabled,” he is janbaz or “soul-sacrificed.”

The War was particularly bloody because both sides had access to some of the latest and most lethal weaponry. When modern weapons were not available, Iran exploited its numerical superiority by engaging in human-wave attacks that were effective against the Iraqis but, at the same time, led to the death of many Iranian youth. Before the Islamic Revolution of 1978-79—especially in the last decade of his reign—the Shah of Iran, Mohammad Reza Pahlavi (ruled 1941-79), devoted a good part of Iran’s vast oil wealth to modernizing the military. This meant purchasing advanced weapons systems from the US, Britain, France, Israel, etc., and financing the training of personnel to operate and repair them. By the time of the Revolution, Iran had one of the largest and best-equipped air and ground forces in the world, and its navy was also strong enough to defend the Persian Gulf against any regional threats to the major sources of oil that lie along its shores. In other words, Iran had become vital to the Carter Doctrine of keeping the Persian Gulf open to shipping.