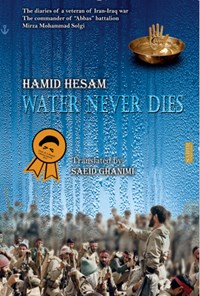 Water never dies, Memoirs of Martyr Mir Mohammad Selgi, one of the commanders of the 32nd Ansar al-Hussein Division, written by Hamid Hesam.

This book Water never dies won the first prize of Jalal Al-Ahmad Festival in 2014. The eight years of war imposed by Saddam's Ba'athist regime against the great nation of Iran are undoubtedly from the golden age and the glorious people of this region, and the reflection of each of its events can be a beacon and a means to know more about the future. Unless, the wise leader of the Islamic Revolution of Iran has said:

"The war was a glorious image, but the distance was in front of everyone. It was magnificent. It was great. "But like the painting they put up above and you want to look at it from a distance, these books have come and pushed the details of this painting forward, and now one can see it up close."

Undoubtedly, reviewing the events of the imposed war through the eyes of Mirza Mohammad can bring us closer to the beauties of that painting.

Who do we recommend reading the book Water Never Dies?