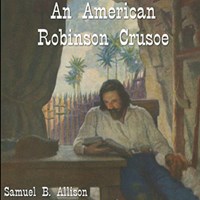 An American Robinson Crusoe By Samuel B. Allisonis a short version of the original story. An indolent, rebellious teen goes on a marine voyage against his parents’ wishes. The ship (and all of its crew) is lost in a storm, but Robinson makes it to a deserted island. He has no tools, no weapons, but he lives for over 28 years on the island. He befriends many animals on the island and after over 20 years living solo, he is joined by a young “savage” who becomes his constant companion. The transformation from the young, lazy teen to a self-sustaining, incredibly knowledgeable adult is one of the major themes in the story.