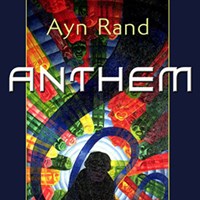 The title 'Anthem' is derived as an anthem to sense of self and self-governing thoughts. Anthem is a story of Equality 7-2521 who is a young man living in some unspecified future time and place. In this future era freedom and individual rights have been eradicated.

The starring character of the novel is an inquisitive street cleaner. He lives in a society where people have lost their knowledge of individualism, to the extreme that people do not know words like 'I' or 'mine'. All the people live and work for their livelihood in collective groups, along with the people with power, namely the 'Councils'. There are many types of councils namely the Council of Vocations, Council of Scholars etc. The society is where all the terminology of individualism is completely restrained. They emphasize the principle that all are equal and should remain that way.

Equality was an outstanding student during childhood and was very interested in learning. He wanted to become a scholar in the Council, but for his thought, he was punished by the Council which is responsible for assigning jobs to each individual. They punished him by assigning him the job of street sweeper.

Equality had a thirst for knowledge that he secretly satisfy by sneaking into a tunnel every evening, where he was alone. He used the time to write, think and to perform some scientific experiments. Soon he falls in love with a woman named Liberty 5-3000.

The book enumerates the quest for knowledge by this young man who struggles to find answers for many burning questions. These questions lead him to discover the mystery behind his society and the key to freedom. You'll find the book hard to put down as it tackles the question of expressing love in a society that does not recognize it.The title 'Anthem' is derived as an anthem to sense of self and self-governing thoughts.