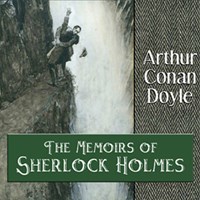 For more than a century and a quarter, fans of detective fiction have enjoyed the doings of the iconic sleuth, Mr. Sherlock Holmes. In the company of his faithful companion, Dr Watson, Holmes has consistently delighted generations of readers. Created by a Scottish writer and physician, Sir Arthur Conan Doyle, this immortal private eye has solved cases for kings and commoners, lovely damsels and little old ladies, engineers and country squires and a legion of others who come to him in distress and perplexity.

The Memoirs of Sherlock Holmes is a collection of 12 stories featuring the pipe-smoking, violin-playing eccentric central character. The collection first appeared in 1894 in serial form in The Strand Magazine and then was later compiled into a single volume. The stories featured here include such gems as The Silver Blaze which is about the disappearance of a famous race-horse. This story is memorable for its “curious incident of the dog in the night-time” remark by Holmes.