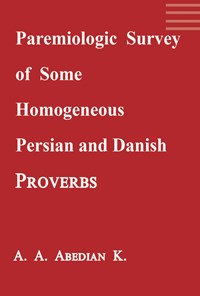 معرفی کتاب Paremiologic survey of some Homogeneous and Danish proverbs

In Paremiologic survey of some Homogeneous and Danish proverb written by Ali Abedian Kasgari some Persian and Danish affirmative and negative proverbs are investigated based on equivalent components. The result shows that Persian and Danish proverbs have spoken of two common categories of values and norms, and anti-values and abnormalities. First, some equivalent positive values and norms such as encouraging to truthfulness, effort, patience and tolerance, pragmatic, wise, etc; are surveyed. And in second term, some equivalent anti-values and abnormal proverbs which have been blamed such as lying, avarice, cruelty, etc; are studied.

This Book will provide a brief overview of the homogenous proverbs in Persian and Danish and description of the usages of some homogenous proverbs in both languages. Persian is the predominant modern descendant of Old Persian and is one of the Western Iranian languages within the Indo-Iranian branch of the Indo-European language family. With a long history of literature, Persian was the first language in

the Muslim world to break through Arabic's monopoly on writing, and the writing of poetry in Persian was established as a court tradition in many eastern courts. Persian has had a considerable (mainly lexical) influence on neighboring languages, particularly the Turkic languages in Central Asia, Caucasus, and Anatolia, neighboring Iranian languages, as well as Armenian, Georgian, and Indo-Aryan languages. For centuries, Persian has been a prestigious cultural language in other regions of Western Asia, Central Asia, and South Asia by the various empires based in the regions. Following the Turko- Persian Ghaznavid conquest of South Asia, Persian was firstly introduced in the region by Turkic Central Asians. One of the major effects of the Persian language on the neighbouring languages is the influx of the Persian proverbs in their contexts, some of them without any changes.

In this book, totally 24 Persian proverbs (including 6 proverbs referred in the footnotes) are paired with the