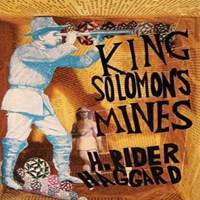 King Solomon’s Mines is the story of the leader Allan Quatermain and his adventurous group of followers on their mission to find the lost brother of an aristocrat, Sir Henry Curtis. Considered similar to Robert Louise Stevenson’s novel Treasure Island, Haggard’s book proved to be another must-read adventure novel in the international literary world.

The African desert hides underneath its sands myths and legends that lasted for centuries in the minds of the locals. Quatermain has a mysterious map that could lead to the ancient mines of the wise King Solomon. The road to discovery is not easy, and the group of adventurers must pass through dangerous and life threatening situations. They are taken prisoner by a local tribe ruled by King Twala, a violent and cruel person who wove his path to the throne by killing his brother and abandoning his sister-in-law in the hot sun of the African desert. The novel presents a whole series of furious battles between the Englishmen and the indigenous tribes, in the end the road to King Solomon’s mines being revealed by the maleficent Gagool. The mysteries deepen when Quatermain discovers the body of the adventurer who drew the map to these mines in his own blood.

But how will they get to the labyrinth of the mines and find the correct route through? This and many mysteries will keep you riveted as you read this book. King Solomon’s Mines is a great book to explore the ancient world and discover wisdom through Haggard's amazing narration.